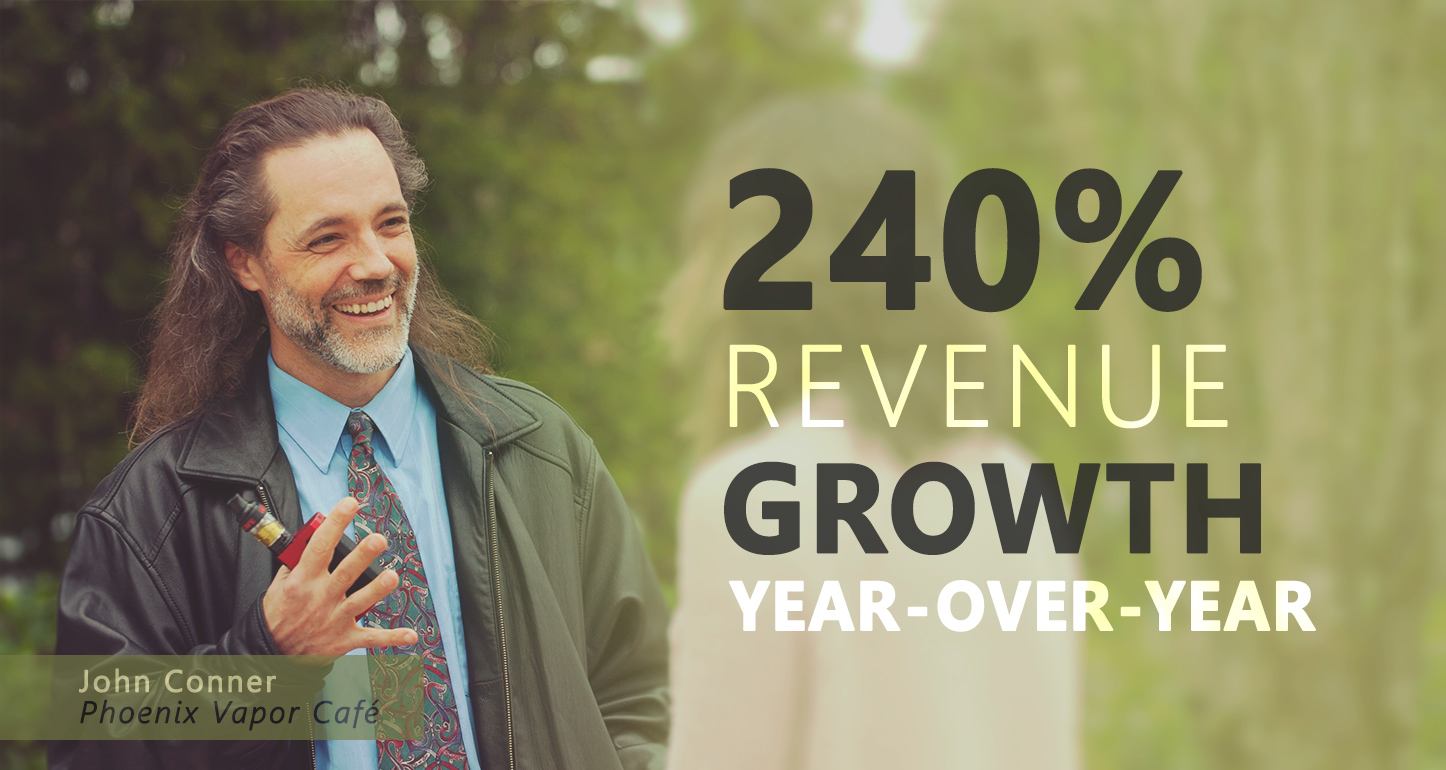 240% Revenue Growth Year-over-Year
In 2010 Seattle-area entrepreneur John Conner opened the first vape shop on the West Coast. For the next few years he watched his business grow like wildfire. Then it suddenly crashed and burned, despite massive consumer demand and the tremendous upside the business possessed.

What happened? With the wisdom gained from the experience, Conner can now clearly identify where things went wrong. And with his company reset for growth he’s experiencing 240% year-over-year sales growth.

Using a goal management software to keep everyone at his company aligned and engaged on the work that needed to be done he was able to get back on the growth track. We’ll dive more into that technology solution after we share Conner’s story.

Explosive growth
With sales scorching-hot at Phoenix Vapor Café, Conner’s flagship store in Olympia, Washington, everyone was telling him “you gotta keep growing.” This was in 2010 when vaping emerged as a major thing. In the next few years he opened eight more stores up and down the coast, including five in California.

Who could blame him for stepping on the accelerator?

“The business was exploding and thinking ‘how hard could this be?’ we expanded in all directions without really any structure,” Conner recalled.

Another major motivator was that this business was a personal passion. He’d tried to stop smoking cigarettes for the better part of 30 years. In 2009 he discovered vaping and overnight he kicked cigarettes.

He instantly felt better, his energy was up, aches and pains had disappeared, he could taste food again. Giving smokers an alternative to cigarettes became his mission – about 1,800 people in the U.S. reportedly die every day from smoking-related illnesses.

In Conner’s mind this was a business with a social cause … and massive consumer demand. The future looked totally golden.

But in 2012 things began to fall apart. His main supplier couldn’t keep up with demand. Loyal customers got ticked off when their favorite vape flavors weren’t available. Competitors emerged, chipping away at market share. Though he’d established managers at every store, many weren’t responsibly running operations. Employee theft became a problem, tax records weren’t adequately managed, expenses spiraled out of control, and a host of other issues seriously began to kill the buzz. Worse, sales started to tank.

“I had employees in the California stores who were doing $100 a day in sales while we were doing over $2,000,” Conner said. “I was spending my time going up and down the coast trying to coach these people who weren’t getting it instead of doing what I really wanted to be doing: stopping people from smoking.”
By 2012 everything had unraveled. Bankruptcy loomed and Conner was looking to salvage the valuable parts of the business he still believed in. In Olympia he met fellow business owner Rick Gifford, who was developing a software application that addressed many of the issues Conner had experienced.

“These guys were extremely chaotic, actually reveled in the chaos,” said Gifford, recalling his first impressions of Conner’s business. “Chaos is fun for a while but not sustainable. It needs to be balanced with a clear purpose with a tool that allows you to step out of the business whirlwind, gather the right information and reflect on what needs to be done to be successful.”

Conner began using an early version of Alliance’s goal achievement application, called MyObjectives. The app focused his efforts on writing company goals that everything in the future would hinge on. It brought clarity, and established needed discipline that allowed the company to reset.

Phoenix Vapor Café is now repositioned for future growth. Conner consolidated operations into one retail shop and five employees at the original site in Olympia, and is focused on online sales. They diversified suppliers. Conner carries a precise profit and loss balance sheet that he can reference at any time to see how the company is operating. And the team is communicating better than ever.

“What I really like about the MyObjectives program is that it replaces those long, boring-ass meetings where we’re trying to figure out what everyone is doing. Because we already know what’s happening,” Conner said. “I’ve written my goals and our five employees have written their objectives and we’re able to meet briefly and pull up the tool and track our progress.”

If problems do surface, they’re documented in MyObjectives and can be quickly talked about or resolved before blowing up into bigger issues. Or, even better, the team meetings center on more interesting conversations that truly energize them – things like their mission of helping people kick cigarettes and new ideas for doing it.

Back on growth track

As for sales, they’re up again. Over the past year revenue rose 240% at the Olympia store and a sharp focus is on growing web sales. They’re developing an online membership model that rewards customer loyalty and increasing education about the benefits of vaping vs. smoking.

“MyObjectives has helped us not lose sight of where we want to go as a business,” Conner said. “It’s allowed us to focus on growing our business in a sustainable way which means we’re able to do more good for people, help more people stop smoking.”

The first team-based solution that provides real-time feedback of your team’s drive toward success.
myobjectives.com

PM2 is a boutique consulting firm of seasoned professionals who have been industry thought leaders for over 30 years. The group participated in the early development of the Balanced Scorecard, Human Capital concepts and other landmark management systems.

What if there was a Fitbit for business, something that tracked the health of your organization? Well, we’ve got it.

MyObjectives focuses on the team effort, reinforcing the truth that when we play the game together we succeed together.

There Be Giants is a management consulting firm that blends business coaching, unique planning methods and leading web technologies into innovative and agile solutions for their clients.